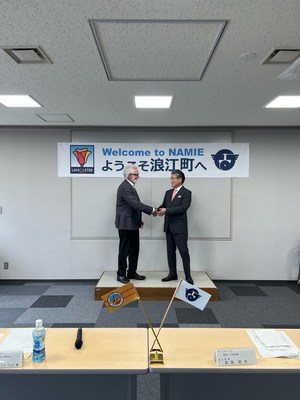 R. Rex Parris, Mayor of the City of Lancaster, and Eiko Yoshida, the Mayor of Namie City in Fukushima, shake hands following a meeting aimed at sharing best practices and strategies to accelerate renewable H2 and fuel cell use.

LANCASTER, Calif., Nov. 23, 2022 /PRNewswire/ -- The City of Lancaster, Hawai'i County, and Namie, Japan have won the U.S. Department of Energy's inaugural H2 Twin Cities Initiative with its H2 – TRANS – PACIFIC Team proposal to develop clean renewable H2 solutions for energy sustainability and strengthening ties across the Pacific. The award announcement was made on November 16, 2022, at COP27 in Egypt by U.S. Secretary of Energy Jennifer M. Granholm, in collaboration with the governments of Japan and the United Kingdom.

Through this trans-Pacific Mentor-Mentee partnership of municipal leaders, Lancaster and Namie, Japan, have pledged to share best practices and strategies to accelerate renewable H2 and fuel cell use in Hawai'i County, the Big Island. Namie and Lancaster are the world's first renewable H2 cities, and have attracted corporate, government, and academic sponsors to help build out their infrastructure.

"Climate extinction is not a problem that Lancaster, Namie, or Hawaii can solve alone. But together, we may lead the way for the rest of the world to join us before it's too late," said R. Rex Parris, Mayor of the City of Lancaster. He thanked the Department of Energy for the H2 Twin Cities designation, which will bring resources and opportunities to green renewable H2 solutions. "Together, we can drive change at the local level and improve environmental conditions for our communities."

Over the past decade, the City of Lancaster has transformed into a renewable energy leader, attracting more than $2 billion of investment in cutting-edge renewable and clean energy projects.

The three municipalities aim to make significant progress toward carbon neutrality by 2035. Although they represent diverse geographies, demographics, economic drivers, and levels of hydrogen deployment, they share a common bond of being early adopters of hydrogen demonstration projects through visionary leadership. Unfortunately, their communities have also all faced an increasing number of natural disasters—many caused by rapid climate change.

Eiko Yoshida, the Mayor of Namie City in Fukushima prefecture, said that after suffering great casualties from Japan's earthquake, tsunami, and nuclear tragedy 11 years ago, Namie City aims to maximize renewable energy usage and production of hydrogen at their world class FH2R facility. "Through the mentor-mentee program and the alliance between three cities, we can share our progress and challenges and continue working toward the construction of a hydrogen society," he said.

The mentee municipality of Hawai'i County, which is perhaps the most vulnerable of the three to natural disasters due to rising sea levels and volcanic activity, also has the greatest diversity and wealth of renewable energy resources that can be converted into hydrogen production. "The vision is to convert to hydrogen, the highest and most available form of energy in the universe," said Hawai'i County Mayor Mitch Roth. "We are starting by turning municipal waste into hydrogen energy to fuel our municipal fleet. Next we plan to generate large amounts of hydrogen from geothermal, solar, wind and other renewables to replace fossil fuel-based electricity generation and decarbonize air travel emissions. Our precious land and beautiful resources will be respected and help to nourish as well."

These ambitious goals and creative solutions are due in no small part to the visionary and energetic leaders of these municipalities, according to Lex Heslin, CEO of Enso Infrastructure, a green hydrogen project developer. Heslin helped bring the three cities together and acts as the H2 – TRANS – PACIFIC advisor. "The Mayors of Lancaster, Namie, and Hawai'i County are known for making bold, positive changes. By working together, they will greatly advance clean hydrogen innovation and deployment to improve people's lives, regional infrastructure, and the environment," Heslin said. "Equally compelling is the fact that this unique trilateral relationship also creates critical trade routes for hydrogen that bridge the U.S. and Japan, providing much needed energy security in the Pacific and Asia."

Lancaster, for its part, has entered into several innovative partnerships with some of the world's leading clean energy companies, which include BYD, which manufactures electric buses; Heliogen, which generates hydrogen from concentrated solar energy; SGH2, which gasifies wastepaper into hydrogen; and Hitachi Zosen Inova (HZI), which converts organic waste into renewable natural gas and hydrogen. The City also started its own utility company, Lancaster Energy, allowing residents to utilize local renewable energy at lower prices.