Cheongju Craft Biennale fascinated the French Ambassador to Korea
- The two countries connected by 'Jikji', hope that this biennale will serve as a foundation for revitalizing cultural exchanges
- Promise of a reunion in Paris next year 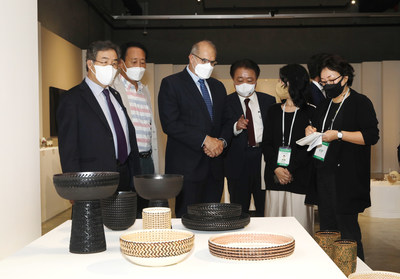 French Ambassador to Korea Philippe LEFORT and Director of the French Cultural Center Ludovic GUILLOT, who attended the Invitational National Day program of the 2021 Cheongju Craft Biennale, with France as the host country, were impressed throughout the exhibition tour on Oct. 6 and impressed.

They arrived at the Cheongju Culture Factory, the main exhibition hall of the Biennale, showed deep interest in the size of the space and the history of the building. Ambassador Philippe LEFORT said in the story of Culture Factory, which was used as a tobacco factory and then reborn as a complex cultural space for citizens, "It is about culture so much that it changes the future of the city. It is very meaningful that France was invited as the host country to the Biennale held by Cheongju, which has a lot of love and pride in Korea."

In particular, Ambassador Philippe LEFORT, who carefully looked at the 159 works of 35 in the Invited Country Exhibition, said, "I liked the work, but I was fascinated by the excellent aesthetic sense of the Biennale, which organized the exhibition space to show the form and technique of the work as well as the philosophy contained in the work."

Cheongju City Mayor Han Beum-deuk, chairman of the Cheongju Craft Biennale, emphasized, "Cheongju is the world's oldest metal movable type printed in 1377, a UNESCO World Heritage Site, and a historical and cultural city where 'Jikji', which is now in the collection of the French National Library, was born." "As Cheongju and France are already deeply connected with 'Jikji', I hope that the friendship between the two countries will be strengthened through more active cultural exchanges based on 'Jikji' and 'Craft Biennale'."

After the biennale closes with France's leading craft association 'Atelier d'Arts de France', they agreed to participate with the winners of the 2019 Cheongju International Craft Competition at Révélations, an international craft fair to be held in Paris in 2022. They promised to reunite in Paris next year.

SOURCE The Organizing Committee of the Cheongju Craft Biennale(South Korea)