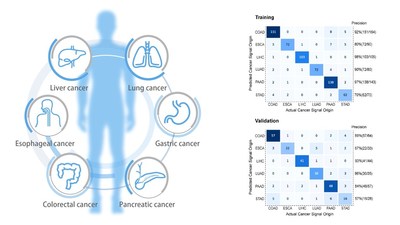 With the HIFI method, a liquid biopsy, platform-based technology developed by Berry Oncology, a single test can early screen for six major high-risk cancers in China, including liver, lung, gastric, colorectal, esophageal and pancreatic cancers, with an overall sensitivity of 87.6%, specificity of 99.1% and overall TOO (Tissue of Origin) precision in 82% of positive cancers, elevating test performance to an advanced international level.

Jun Zhou said, "In this multi-cancer early screening study, Berry Oncology specifically chose lung and gastrointestinal cancers as the breakthrough point as they pose the highest threat in terms of morbidity and mortality in China. From the outset of our product design, we specifically took into account the tumorigenic characteristics of the Chinese population and which cancer most urgently needs early screening solutions."

Notably, the detection of pancreatic cancer, one of the most challenging and malignant of cancers, has once again demonstrated the extraordinary performance of Berry Oncology's early screening technology, with a sensitivity and specificity of over 90% and an area under the curve (AUC) of 0.975.