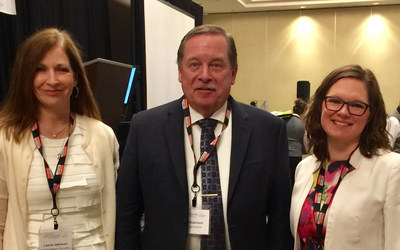 The dynamic conference featured the first public release of results from a new earthquake scenario and risk study for the San Diego-Tijuana region. Developed by experts over the last five years, the scenario showcased the impacts and consequences of a potential magnitude 6.9 earthquake on the Rose Canyon fault that runs through the heart of the San Diego metropolitan area and harbor.

The Rose Canyon fault is considered a major seismic hazard to the San Diego region, the third largest and one of the fastest growing population centers in California. The region's large population coupled with the poor seismic resistance of its older buildings and infrastructure systems, make San Diego vulnerable to earthquakes.

By raising awareness of the earthquake threat, experts are hopeful that the newly released report will prompt actions towards reducing risks from earthquakes. The report presents a vision for a more seismically resilient San Diego and outlines the next steps towards improving the San Diego region's resilience to earthquakes.

Optimum Seismic, Inc., the newest Gold Subscribing Member of Earthquake Engineering Research Institute (EERI), is one of California's leading advocates for earthquake resiliency and sustainability.  Since 1984 the Optimum team has been designing and constructing earthquake retrofits and has completed more than 3,500 construction projects throughout California including multi-family, concrete frame non-ductile, steel frame, unreinforced masonry, bridges, and historically significant retrofits.

"We are very pleased to have Optimum Seismic, Inc. bring its wealth of earthquake retrofit experience to the Earthquake Engineering Research Institute," says EERI President Laurie A. Johnson.  "Optimum Seismic has a tradition of safeguarding our communities and advancing professional development opportunities for seismic safety engineers."

A recently published white paper on the economics of earthquake retrofits entitled "Economic Benefits of Earthquake Resistant Buildings – Why Business and Government Should Invest Now to Protect California from Devastating Earthquakes" authored by Sahabi and the US Resilience Council's Evan Reis was distributed to conference participants.  Free copies of the white paper may be downloaded at https://www.optimumseismic.com/economic-benefits-of-earthquake-resistant-buildings-whitepaper/

The conference featured discussions of lessons learned from the Ridgecrest earthquake on July 5, 2019, and the aftershock sequences.  The Earthquake Engineering Research Institute's Annual Meeting was also held in conjunction with the NEC, which way cosponsored by the nonprofit Federal Alliance for Safe Homes (FLASH), the country's leading consumer advocate for strengthening homes and safeguarding families from natural and manmade disasters.