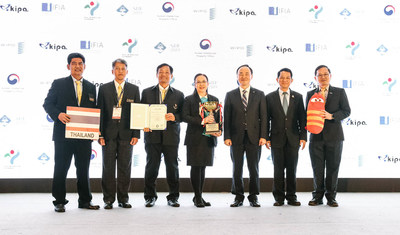 Officially sponsored by the World Intellectual Property Organization (WIPO) and the International Federation of Inventors' Associations (IFIA) SIIF marks it's 15th anniversary this year. SIIF 2019 felt the Korean Wave in intellectual property, with a total of 625 inventions from 27 countries and regions including the United Kingdom, Malaysia and Thailand participating. Award were selected after an on-site evaluation from November 27 to 28.

One of the ten grand prize winners of this year is Thailand's Enhancement of Exhaust Gas Temperature Control System in Gas Turbine.

Other nine other grand prize winners are:

This year, SIIF served as an arena to witness global consumer and technology trends from an array of invention exhibitions. It also presented traveling global inventors with K-pop performance by MUSTB and special exhibits with BTS, Larva and Seoul ZeroPay to open doors to a Korean wave through the bilateral exchange of intellectual properties.

Koh Joon-ho, vice president of the Korea Invention Promotion Association, stated, "I hope that SIIF 2019 inspires participants to come back next year with even better inventions," adding, "KIPA will continue efforts to have Korea contribute to the exchange and development the global inventor community."